Err. It’s not. Please read the bottom of this blog article.

Note: This is with some form of overclocking. Sorry. Can’t say anything else about it. Also note that the used model identifier (Macmini8,1) and board-id (Mac-50619A408DB004DA) were only used, I’m told, to make the setup easier. This is certainly not an indication of a new Mac mini (sorry).

Update: Wait a minute! This Geekbench result may be questionable, to say the least, because I also found this result: 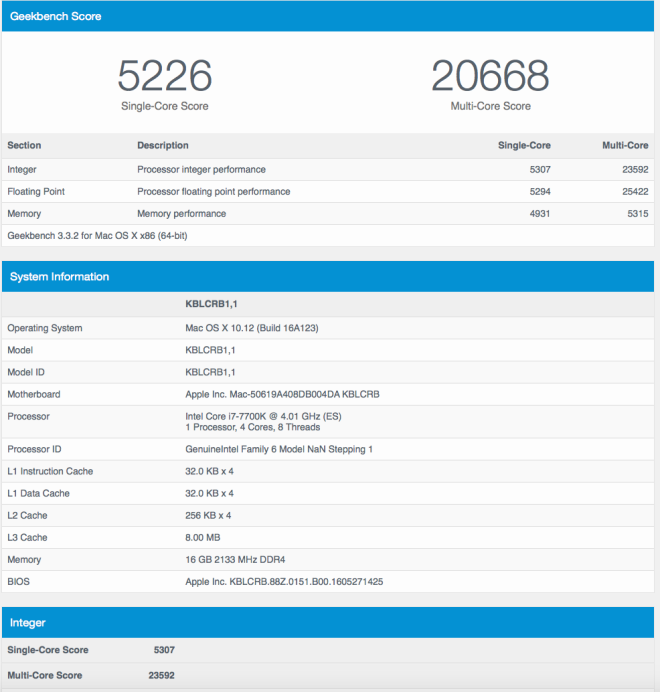 Same score… but with a different model/memory configuration. We are also still months off of a release so let’s take this with a grain of salt.

Update 2: This is not a new Apple product, but one and the same hackintosh (with two different SMBIOS setups). Well. That is what I was told.

Update 3: I also asked for the IORegistryExplorer dump, which I always do, and got nothing. Not even a reply.

Yeah. You know what they say. If it seems too good to be true… it probably is. Seriously? What is wrong with people?

I need to replace my current Skylake setup – my current setup sucks – and I want to use parts that I already have here, but this time I want a motherboard with HDMI/DisplayPort, and without unused legacy ports like PS2 and VGA. Who need that in 2016 anyway. Here is my initial setup:

PSU
SeaSonic 80 PLUS Platinum 400 Fanless (to be replaced by a 520 Fanless when the Nvidia GPU arrives).

I would love to have a motherboard with Thunderbolt 3 and WiFi support, but paying 200 Euro extra, on top of the Z170 Pro, that is in my opinion not worth it. But perhaps someone else here knows a better motherboard?

Tim Cook back stage in Amsterdam

Minutes before entering the podium. Now in talk with Dr. Neelie Smit-Kroes

So far nothing new, but still good to see him here. Hmm. This is interesting. Apple folks are going to volunteer, assist and teach teachers in The Netherlands. Nice.

Sorry Eric. I am going to the Apple store now. Crap. Tim Cook went to the Apple Store yesterday already (I missed it). 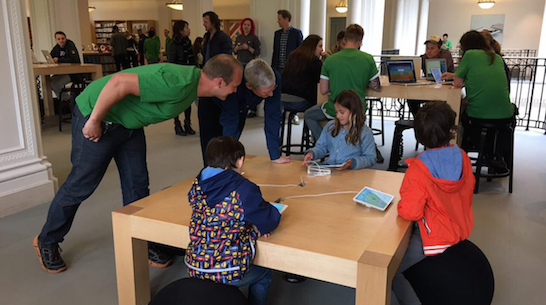 Anyway. Where is Tim Cook? I know he’s not visiting the Anne Frank House, because he was there yesterday already.

Too bad. I had some question for him… about open sourcing OS X. And not just parts of the kernel and some drivers, but the whole lot.

Apple seeded the first beta of El Capitan OS X 10.11.6 (build 15G7a) and, for now, the most obvious change is a couple of modifications in the sandbox (configuration) data:

Presumably to combat security issues (with software update). And you may remember the Geekbench scores (1 and 2) with that strange SKLCRB1,1 model identifier. Well. I now have, after digging through AppleGraphicsPowerManagement_Info.plist, reason to believe that they are real and from Apple and this is why:

It may not use the same processor, but this board-id was/is being used for testing. Why else would Apple add Broadwell (the first three) and Skylake (the next twelve) device-id’s to that board-id. A great trick to hide your trails 😉

Anyway. Next time you see a Geekbench score with board-id Mac-50619A408DB004DA and a funny looking model identifier, then you know what to make of it.

Edit: They used Build 15W4314 during the test runs with Geekbench, which may be an indication that we won’t see new hardware before OS X 10.12 is released (10+12=22 and that happens to correlate with the letter W).