Someone e-mailed me and asked me how I worked around the initial USB problems after the introduction of the Skylake motherboard/processors. Well. This was actually easier than you may think and this is what I used:

What I did, basically, was to nullify the namespace of Device (XHC) in the ACPI tables so that the Apple USB drivers could add the USB ports for me. And it did. This will however not solve the USB problems, as you will likely still hit the USB port limit of 15 ports, but this gave me all enabled USB 2.0 ports and a number of USB 3.0 ports, which I used to make the following scheme for the ports on the backplate: 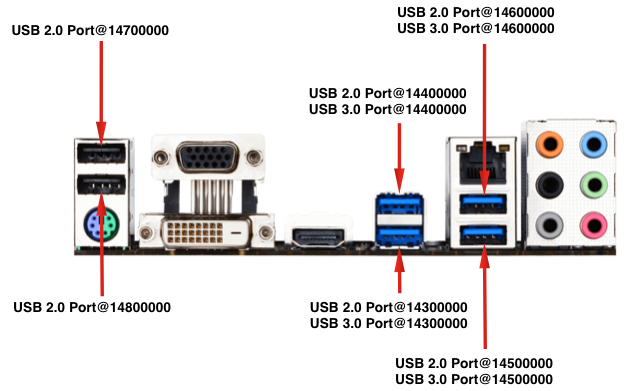 And this one for the USB ports coming from the 20-pin front connector on the motherboard:

The next step was to write a XHCI SSDT to enable all the ports that I needed – I only skipped the port for the onboard F_USB2 connector to get to the maximum supported port numbers and have every port working. Oh and I also added this little snippet:

Not too many people know about this requirement so here it is.

p.s. I’m still on holidays (we’re in Germany now) and I will add the SSDT when I am back home again.