It is quite obviously to me. After all. They released a firmware update via projectosx.com which includes everything to boot OS X, including FakeSMC.kext. They only used projectosx.com to hide their involvement. This is also why ‘TheKing‘ made this post at insanelymac.com, to make it clear that they used tor to hide their trails: 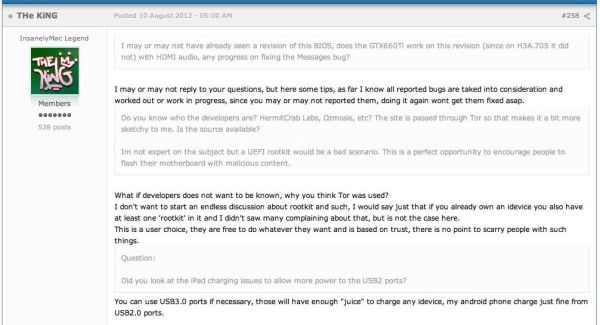 And he said to be one of the developers here:

Which to me is not so smart. In fact it is a rather stupid action. And since I obtained his address info last year for Sam – you may recall him begging her to remove it from her blog – so can Apple.

So it is not a matter of if but when. I mean come on. Apple fights big guns like Samsung, so who is Quo Computer again? Right. A company using the hard work of other people to make money.

Remember the guy that made that silly USB dongle and used software and other code from the community? They screamed rape and murder, but now we should all be happy and be quiet. Why? Because some silly company, and a hand full of jokers like ‘TheKing‘, want to make money over the backs of hard working people. Not to mention Apple, for their use of OS X, which is why I don’t like companies like Quo Computers. Or people asking for donations.

Note: Hacking OS X is just a hobby for me. Not to earn my money, which I do with real Apple hardware by the way. And what is the fun when everything works out-of-the-box? None for a hacker like me, which is why I keep up with the latest available hardware. Yup. New hardware means a new challenge to get everything going, but after that I lose all interest in it.

Tip: Get yourself a VPN connection for cheap and you will be safe i.e. do not ever visit a forum or use e-mail without a proper VPN network!

Update: The comments are now moderated. We had to do this as a precaution when rampagedev questioned my sisters passing. Which is uncalled for and show you what kind of sick people we have to deal with.